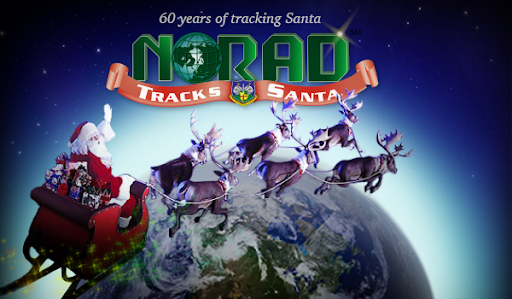 “Every year, in a tradition that dates back to the Cold War, volunteers field tens of thousands of calls and emails from around the world, according to the North American Aerospace Defense Command. Children ask for Santa’s location, discuss their Christmas lists and probe volunteers for other details,” National Public Radio (NPR) said.

If it wasn’t for a typo in a 1955 local newspaper, those volunteers would not be working two hour shifts on the morning of Christmas Eve.

That year, the newspaper accidentally printed a colonel’s secret hotline at Peterson Air Force Base, instead of his store’s number. This Colonel’s name was Harry Shoup.

Shoup picked up the line, expecting a call from a four star general at the Pentagon, but instead he received a call from a little boy.

“‘And then there was a small voice that just asked, ‘Is this Santa Claus?’’ his daughter, Pam Farrell says,” NPR said.

Shoup, who was annoyed at first, responded cheerfully to the crying little boy, and asked to speak to his mother. The mother then proceeded to explain that an ad in the newspaper told kids they could call Santa at any time, day or night.

With more calls coming in, Shoup put his own airmen on the phones to answer as Santa Claus.

And the rest is history! The Santa Tracker has evolved a lot over time, with updated technology and new features.

“‘We use radar systems scattered across the world, along with satellites providing infrared imagery, and then we have Santa Cams scattered throughout the world,’ Walter [a mission crew commander with the Canadian Air Defence] says,” NPR said.“‘And then jet fighters that also go out and intercept Santa.’”

However, knowing this information, there has been a lot of criticism towards NORAD for using military products for their Santa Tracker. Despite this, none of it diminishes children’s cheer when they pick up the phone.

However, unlike when Shoup answered children individually back in 1955, today you can’t talk to Santa directly.

“‘Santa and his reindeer must go, go, go,’” booms an animated Santa in a series of NORAD FAQ videos,” NPR said.“‘We can’t stop to chat, although it would be fun.’”