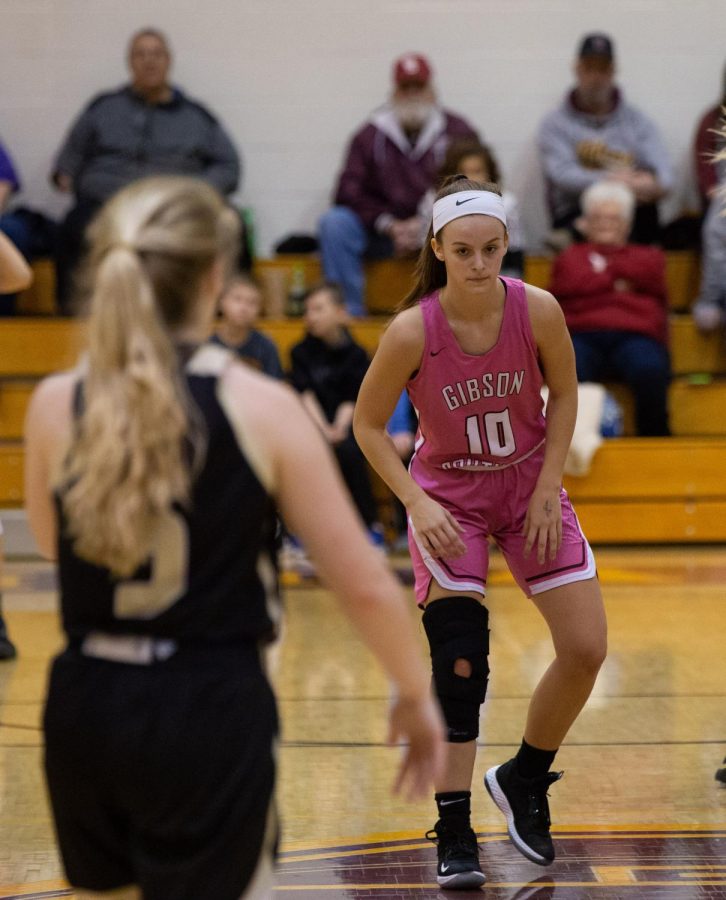 The Lady Titans faced off against the Lady Hatchets in a non-conference game. They were coming off a long stretch of consecutive wins heading into this bout. They were, before this game, 15-2 on the season. The Hatchets also had a near perfect record of 14-3 for the season prior to the game.
The Titans ended the first quarter with a small lead of 17-11.
At the five minute mark in the second quarter, the ladies increased the lead to 10. Both teams fought back and forth for the remainder of the quarter. With time expiring at the end of the second, the Lady Hatchets tried to bring its deficit to five with a baseline runner, but the shot was rejected by sophomore Taylor Singer at the buzzer. At the half, the Lady Titans maintained the lead, with the score being 34-27.
After halftime, the Lady Hatchets started strong with an 8-0 run led by Kencia Levasseur, which put them up one point. The score was close throughout the third as both teams battled. The quarter ended with Gibson Southern leading 49-43, after a perfectly timed pass from out of bounds to senior Brooke Goedde, who connected for a buzzer-beating three.
The Hatchets started the fourth with an all too familiar scoring flurry that tied the score 49-49. With two minutes to go in the fourth, the Lady Titans were down three. Senior Meredith Raley received the ball on the block, spun, drew a foul, and converted the bucket for an and-1 play.
The Titans defense hurt them once again, as the Hatchets immediately came down and nailed a three. This forced the Titans to foul with 1:30 left in the game. The Hatchets made both free throws. The Titans came down and immediately fed the ball to Raley, who made the layup. However, as soon as her shot went up, she came crashing down, holding her lower leg. The crowd remained silent as she was brought to the bench.
The Lady Titans fought all the way until the buzzer sounded, but it was not enough. The Lady Hatchets gave the girls their third loss of the season with a final score of 53-50.
Raley, junior Kamryn Miller and Goedee were the leading scorers for the Titans with 22, 9, and 9 points respectively. Alania Thorne and Kencia Levasseur were the standouts for the Hatchets with 17 and 22 points each.
“Number 33 (Levasseur) was really the difference for them in the second half,” head coach Kyle Brasher said. “Giving up 36 points in a half isn’t going to get it done, we needed to keep our lockdown defense all four quarters.”
The Lady Titans gave up 17 layups and short shots in the game.
“Our defense was lacking, and we gave up too many easy layups, which allowed them to get a lead late in the game,” Singer said.
The Lady Titans are, however, optimistic that they will come back stronger and win the next one.
“We are just going to learn from it and come back stronger for the next game,” Singer said.