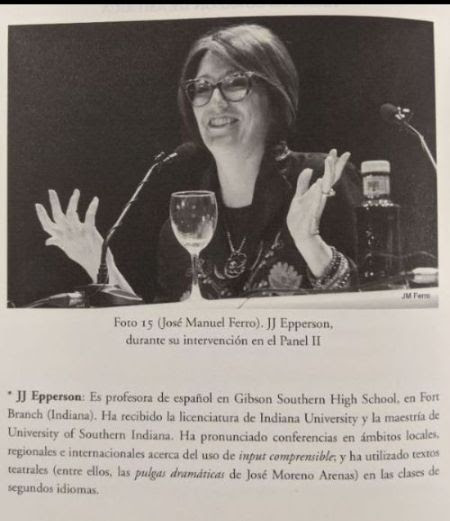 Spanish teacher Señora Epperson has officially become a published author. To earn her master’s degree, she was able to participate in a study abroad experience from USI. She studied in Spain with a director for five weeks. Her host introduced her to José Moreno Arenas; he is known for writing short 2-3 page plays.

“In my opinion they are the perfect depiction of spanish humor,” Epperson said. “They are a little bit dark; somebody usually dies, or there’s  a car wreck. You know, a twist that makes it funny.”

She told Moreno Arenas that she was planning on using those in her spanish 4 class, this year’s seniors. José Moreno Arenas invited Epperson to come back that same December, in 2017 and present at a conference that was about him.

It was an international conference of playwrights and directors and she was to give a talk about how she used his plays in class. So, she wrote a paper and created a movie of my students doing plays. This showed how she does things in her classroom. Her paper was completely written in Spanish.

She went to Spain in December and presented her paper. Monday, December 9, she received a copy of the published book. Her article is partly a research paper, as well as a mix of practical experience.

“It’s a little bit atypical of a master’s level paper, because I threw in some personal experience and it wasn’t a study,” Epperson said. “It showed how I used other people’s research in my class.”

In Epperson’s opinion, it was very challenging to write a paper at that level in spanish. While she would love to do it again, those invitations are very few and far between. She was lucky to get the opportunity, because normally the University of Southern Indiana doesn’t have masters students invited to present at national conferences, such as the one she attended.

USI paid for her entire trip. It was such a unique opportunity, so Dr. Humbaugh gave her the time off to go do it.

“I’m so excited,” Epperson said. “It is a really neat feeling to have your name listed in the table of contents and actually have a bibliography that starts with our name. I’m just very honored and grateful for having the opportunity to do this.”